On the Road Again 2 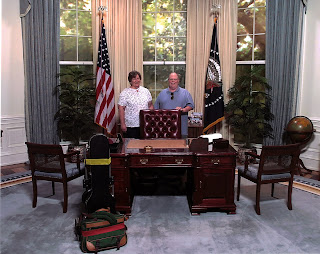 My passion is music. My wife Ann? Her passion is books. She loves books. She loves books a lot! She loves the books she's read and loves the ones she hasn't read just as much. She loves going to libraries... even libraries where you can't check out, or even look at any books. She has taken me to four Presidential libraries, now, and I've found out the awful truth: you can't check out any books there! "What the heck kind of library is that?" I ask her. She just sighs and says, "They're not that kind of library. They are the kind of library where scholars go to research things about Presidents." It doesn't make sense to me, but it must be true if she says so.

I've got to admit that the museum part of the George H.W. Bush Library was pretty cool. It had neat stuff in it like a tennis ball launcher he gave to Gorbachev, a gold plated putter some middle east royalty dude (aren't they all the same?) gave to him, and his old Studebaker and fishing boat. I think my favorite part was this kind of family room where it had comfortable furniture and a TV which constantly played a bunch of funny things, like Bush introducing Saturday Night Live, and Dana Carvey doing impressions.

This picture was taken in a mock-up of his Oval Office. Even though it was just a set, and the volunteer said we could, we just couldn't bring ourselves to sit in the chair: it would have felt disrespectful. Anyway, just as the volunteer snapped the picture, Axecalibur rolled into the office. After a week of reunion type stuff I was pretty brain-dead, but I thought that was kinda weird.

Today, the morning after, as we headed down the final leg of our journey, I think I found out what the deal was... Ann said that last night I fell asleep pretty quickly, and just before she fell asleep, she thought she heard someone say, "Sleep well, mere mortal, for your real journey has just begun!"

Two guesses who that voice belonged to. And that warning was a little bit ominous. I suppose I'll just have to wait and find out what the deal is with Dracrevocsid, the Lady of Lake Taneycomo.
Posted by John Derby at 5:43 PM