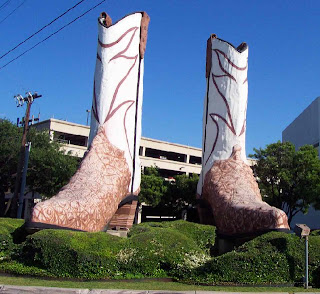 We made it! We're in San Antonio, TX, where everything is big, big, big!

I've only just begun and have already seen Kim Holl, Leon Harris, Doyle Church and Rabbit Simmons --- yes the Rabbit Simmons. He was bass player for the Commodores and he's the guy who asked a pesky Bay Area restaurant manager who had her live pet parrot on her shoulder, "Hey. Where'd you get the pig?" She said, "It's a parrot!!" falling right into the trap. "I was talking to the parrot," he replied. I also saw Ben "Hoss" Winters who used to play with the D.C. band Country Current. I told him I thought he had died, but obviously he hadn't. I understand that Pat Verner, past bass player for Country Current, will be checking in later today.

On the drive from Dallas to here we saw a billboard which was obviously could have been paid for by George W. Bush, however the official story is that it was paid for by a small group of businessmen who wanted to remain anonymous. It had a big ol' picture of him and the message: Miss me yet? How's that hope and change working out?"

Just time for a quick note and breakfast before the first Concert Band rehearsal. More later. The wife needs the computer.
Posted by John Derby at 3:02 PM