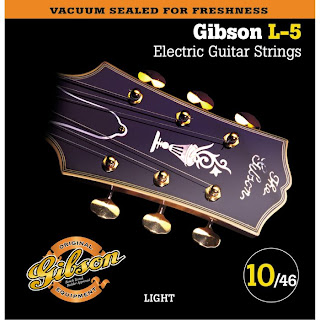 I've spent an inordinate amount of time, lately, thinking about strings. I mean when Dracrevocsid, the Lady of Lake Taneycomo, hands you a magic axe, you can't just slap on any old thing that goes twang in the night.

I never used to give much thought to strings, and it would have been pointless: when I was transferred to Orlando, my first duty station --- you didn't have any say in what strings you used. It was either use what NMPC sent you, or buy your own. So it was a big deal when the supply CPO (I'm pretty sure it his name was MUCS Sam Patz) figured out a way to buy my Ernie Ball Super Slinkies from a local music store.

MUCS Patz was notable for two talents: 1) He was an incredible wheeler-dealer; the kind of guy who bought a big-ass Lincoln cash when the price was lowest... during the famous gas shortages of the early 1970's. And 2) was one of the last of the dying breed of vibes players, which of course meant that he had a lot of time on his hands to practice his number one talent. If you have read my earlier posts you'll remember that I alluded to the bad attitude I used to have. Well, one day I snapped. The band officer, Who-Will-Remain-Unnamed, whom I hated anyway, had done something or other which really yanked my chain. "That's it!" I announced, "I'm going to kill him!" It is evidential what a big deal those guitar strings were that MUCS Patz was able to stop my rage by barring the door and pleading, "Don't do it! Remember, I... I got you those guitar strings you wanted."

The Ernie Balls were really, really thin, starting out at .009 on the 1st string. I got to ordering extra 1st and 2nd strings onaccounta they broke so often. Not only that, but they were really, really sensitive to temperature and sunlight. I remember playing a concert at Walt Disney World on one of those days when spotty clouds passed, creating periods of shade and full sunlight. Every time the clouds were overhead, the strings would contract, causing them to go sharp. Conversely, every time the clouds passed, the strings would expand, going flat. This was in the day before in-line guitar tuners, so the entire concert was MC'd accompanied by me twanging quite loudly (did I mention my bad attitude?) to get the guitar tuned before the next number. I played those Ernie Ball strings all the way through Orlando and at my second band, Navy Band San Francisco.

My next duty station was the Naval Academy Band. Sometime in there, I switched to D'Addario EXL-110's, which were a little thicker, starting out at .010 on the 1st string. They sounded okay and the slightly thicker strings didn't break as much --- I guess that was the main thing. Still, I carried a spare guitar which was always tuned and on the stage in case I broke a string. I stuck with the D'Addarios through the end of my Navy career. I dunno, to me, playing rock on a solid body guitar, it doesn't really matter much what guitar strings I use: whatever tone there was being so often distorted or effected in some other way. They all sounded pretty much the same to me, at least close enough that the main selling point was string breakage.

But now that I have Axecalibur, a Gibson Les Paul Supreme, and intend to play mostly jazz, the choice of strings becomes very important! All kidding aside, many guitarists would ask why I got a Les Paul if I intend to play mostly jazz. Well, several factors went into my decision. First, I needed a lot of gear besides a guitar: bass (I'll get to that), amp, effects, software, etc., and the VA was footing the bill. I had to write a very detailed business proposal for my target business of not only playing, but also copy, transcribing and arranging work. This proposal had to pass the scrutiny of my VA Voc Rehab Counselor, then on to VetBiz, where a panel of volunteer businessmen reviewed my proposal to decide whether to endorse it or not. Then, it had to go to my counselor's boss in St. Louis for final approval. Altogether, my proposal asked the VA for more than $7,000 in equipment, web page development, etc. Adding a quality jazz acoustic-electric guitar would have added around $6,000 to that figure. Naturally, one of the considerations in granting approval was cost, and I was trying to keep it as close the the $5,000 limit as possible.

So I've got a Les Paul Supreme, a Victor Bailey Fretless J-Bass is on the way, and I can't put just any old strings on them, so I did a lot of research on the internet. According to Steve Abshire, Herb Ellis used D'Addario medium gauge flatwound strings (.13 -.52 or .54). Steve uses Thomastic-Infeld medium gauge BB 114 strings (.14 -.55) round wound strings. All I can say is WOW! Steve must have the hand strength of a gorilla. Those are some thick strings. By way of contrast, I am using Gibson SEG-900L Light L5 Pure Nickel Wound Jazz Electric / Wound Third String. I chose them because the salesmen at Guitar Center tell me that Les Pauls just behave better with strings gauges 10-13-18-26-36-46 or so. Unlike many other stores, the guys at Guitar Center of Springfield, MO aren't just out-of-work rock guitarists... they actually seem to know what they are talking about. For the J-Bass, after some research and Max Murray's opinion, I'm going to start out with Rotosound round-wound gauges 40-60-80-100 which I'll have to special order since they aren't available in a set in those gauges.

Up to now, in this episode of my blog, everyone who isn't a guitar player has probably had a hard time staying awake. That's about to change.

One of the cool things about guitar strings is that they can be used for many other things besides just on a guitar. Over the years, I've used guitar strings for a number of jerrybuilt or improvised purposes. I've used them to secure speaker mesh to an amplifier, to hold a microphone onto a broken mic. clip, to hang Navy Band signs, to temporarily repair drum pedals, provide upward pressure on a sticky piano pedal... The list goes on and on. When staying in a non-air-conditioned barracks, a bottom E string, shoebox, piece of paper, and wire snips can be used to build a personal fan. I know. I've done it. They can also be used around the house, for instance, to tie cupboards closed so the little tykes can't get in them, to hang pictures, etc. Lost your cotter pin? Voila! Problem solved.

Now it's your turn! What wacky things have you used guitar strings for? Both on the road and off. Post a comment with submission(s). The wackiest will win a free night on the town... you just have to come to Springfield, MO to claim your prize.

That's about enough frivolity for now. Next episode will be some more funny sea stories, including a couple involving Herb Ellis' or Barney Kessel. Watch your email boxes... Well, I need to go practice now.
Posted by John Derby at 7:00 AM