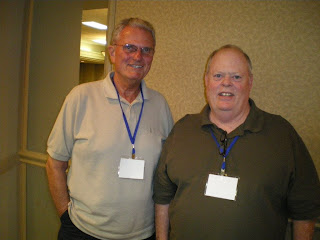 Day 4 of the NMA reunion. Here's the guy who got me in the Navy Music Program. MUCM Ben McHorney. The 7th Fleet Band was on a tour of various ships off the coast of Viet Nam when they arrived at the USS Okinawa LPH-3 where I was stationed as a Quartermaster (QM3). I wanted to be a Navy Musician in the worst way, and I got my wish! When the band found me on the Okinawa, I was working on the bridge as a navigator and also part timing as a Chaplain's assistant.

When I first joined the Navy, I didn't really play guitar: I knew a few chords and could play Alice's Restaurant. Rather, I played violin. I had told the recruiter so and that I wanted to be an MU. He said, "Aw, sure, they'll take ya", which, of course, was a lie: the Navy didn't have any violinists.

I was Pinocchio. The recruiter was "Honest John".

Before I knew it, I was a QM on a ship off the coast of Viet Nam. I began practicing guitar because the Navy did have some of those. To make a long story short, I auditioned (Ben and Don Junker saw something in me), was accepted and was sent to the MU "A" school. After passing the basic course, I was sent to Orlando, my first band.

The thing about Ben McHorney that makes me sick is that except for the gray hair, he doesn't look any different nearly 40 years later.
Posted by John Derby at 11:28 AM