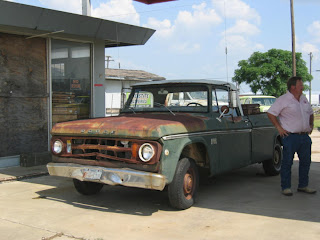 Today's the day! We stopped in Waxahachie, TX (I've included a picture) for the night and we're just about to get back on the road for the final six or so hours to San Antonio. My wife, Ann, has been uncharacteristically quick off the block this morning and is almost ready to go, so I'll have to make this brief --- no, it won't be like my usual lugubrious diatrive... And I mean quick!

I was thinking about road trips past as we were driving down here. I was thinking about the stupid games we used to play on the road. You know, like 20 Questions, etc. What brought them to mind was that my wife and I were playing "Who Can Spot the Most Walmarts". I won, of course, at the score 6 to 1. It was just about then my wife announced that it was a stupid game and she didn't want to play anymore. Well, of course it was stupid. She was losing!

Frank Mullen used to have a game called the "Cigarette Lighter Game". I can't for the life of me remember how it went. I'll have to put our heads together and see if I can remember. If we see Charlie Sweet in San Antonio, maybe he'll help us. As far as Frank and I can remember, the only point of the game was to irritate Charlie, so he might have a better recollection than we.

Well, gotta trot. She's ready to get on the road. More later. Oh, and I think we may have given Dracrevocsid, the Lady of Lake Taneycomo, the slip. I haven't seen her since we left.
Posted by John Derby at 7:19 AM