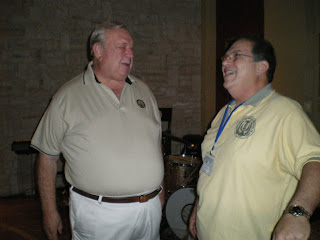 Here is Rabbit Simmons (on left). Yes, the Rabbit Simmons. Aside from being a fantastic bass player, I'll always remember him for the story of "Freddie-In-A-Basket and the Nine Screaming Niggers"*.

Rabbit was performing in the Jacksonville Beach area when he passed a blues club which had on the Marquis: "Freddie-In-A-Basket and the Nine Screaming Niggers". He said he just had to see what that was all about, so he went into the club to check it out. When it was time for the show to begin, the drummer and bass player started playing while the horns shuffled out. They picked up their horns and began to provide some pop licks. Then, with a fanfare, the two backup singers came out carrying Freddie, who had no arms nor legs, in a basket. There was a boom mic on the floor. They put Freddie down, spun him around a couple of times, then he sat up and began to sing. According to Rabbit, "That cat was one of the best blues singers I ever heard. Think about it. He could really sing the blues."

*No racist intent is behind this story. Rabbit swears that it is true and that he only reports the name that the group chose (for some reason) and which was on the Marquis.
Posted by John Derby at 6:38 AM