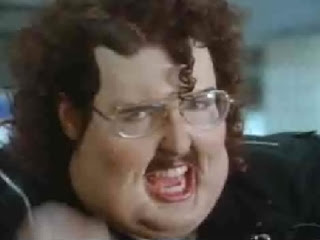 Only 12 days until the NMA Reunion and my wife and I are down to worrying about what to wear and I'm worried about what to play. I've been working diligently on my "A" list of tunes... tunes like "I Want to Be Happy", "Isn't It Romantic", etc. Fortunately, I have Bob Roetker's fake book. If you haven't asked Bob to email you a copy yet, don't delay! His link is in the side-bar and it is the best jazz fakebook I've ever seen!

Also fortunately, the Chief Fashion Advisor (FAC) has left some advice on Frank Mullen's page, Navy Lyres (link is also in the side-bar), on what to wear. Also, also fortunately, I, uh... acquired a draft of the FAC's recommendations. Ann and I went out shopping for clothes for me the other day. Let me state for the record that I hate shopping for clothes! Also, also, also fortunately, my wife is one of the few females I've ever met who feels the same way that I do about clothes shopping. Our motto is, have a list, get in, get the list and get out! Our first (and only) stop was the Casual Male XL (which is a nice way of saying "Big & Tall" --- you can assume I didn't go there for the tall sizes, but I won't tell you how many "X"'s I bought) and we found almost everything on the list. Forty minutes and a few hundred bucks and we we're outa there leaving the store with a very heavy bag, giddy with excitement or sticker shock (I don't know which). Today, I plan to get the last couple pairs of pants, call it good, and rest the next day.

Ann is not as fortunate as I: she is going to go shopping with my eldest daughter, Kim. Why is it that chicks never do anything by themselves? Kim is the kind of girl who is compelled to look at everything in the store! Whether it is the right size or not! No matter if the clothes are even for the target person. A day of shopping with Kim is exquisite torture! I went shopping with her exactly once, and I swore I'd never do it again.

So shopping for myself was relatively painless, but deciding on "A" list tunes is not. Bob Roetker's fakebook is more than six hundred tunes. Six... hundred! And almost all of them are good! Since Bob's fakebook is in PDF format, I was able to print out the approximately 100 tunes that I especially like and/or are likely to be called on the stand. Still, 100 tunes, while not a large number on an absolute scale, it is a whopping number on a "used chops" scale. I thought of asking Dracrevocsid, the Lady of Lake Taneycomo, for her opinion but, as you will know if you have read my previous postings, she tends to be a bit long-winded and I only... have... twelve... more... days. Yikes! I've decided just to go with the flow, take what I have, prepare for the worst and hope for the best. If they call up a tune I don't know, I'll just make a lame excuse about wanting to spend some time with my wife or something, and sit that one out.

Flustered, I think instead about the gear I'm going to take. The list is long, and I can only hope that including my wife's trunks, it will all fit in the car. Oh, I'm sure we can make it work, somehow. I remember John Jensen's old VW Bug in Orlando. We used to pack an incredible amount of instruments and equipment in that decidedly uh... petite car. Let's see, guitar (obviously), amp (check), extension cord (check), incredible folding two-wheeler (check), effects unit in case I can't talk myself out of playing some rock (check), music stand --- I hate band fronts and those awful wire stands (check), cables --- don't forget a spare one (check), guitar stand (check), spare strings and picks (check), I've got to remember the string winder and wire snips (check), little bitty recorder (check), practice headphones (check)... Did I forget anything? I sure hope not!

Speaking of John Jensen and his love bug, I can't help but remember going with him to the Quarterback Club in Orlando for jam sessions. The first time I went with him, I felt like a bug under a microscope. It was one of those jazz clubs frequented by people who want to get jazzed on something besides music. We were two of the only three or four white guys in the club. It was one of those places where we endured hostile scrutiny until one of the regular musicians said, "It's okay, they're with me. They're cool."

I remember a sax player named C-Major... Apparently, at one time, he had had a reputation for only being able to play in that concert key. And I'll never forget the B3 player... Magic. He was a fine musician with incredible chops. Whenever he was asked how he could play so fast, he'd just wiggle his fingers and say, "Magic." We played some pretty darn good music in that club. After a few visits, I was a known quantity and felt safe going there by myself.

And who could forget a white guy who insisted on being called "Mr. Entertainment". His trick was that he played extremely underwhelming one octave solos --- with two unison trumpets in his face at the same time! Talk about a waste of space. People were patient with him, though, providing welcome comedy relief. I also remember another jam session John and I used to go to. There was this really annoying drummer... He started off at "average", but tapered off from there, to "embarrassing", but the dude didn't have a clue. It was so difficult to play with him that one time John Jensen and I decided to leave early. As we were leaving, John leaned over the drum set and motioned to the guy to lean closer. When he did, expecting some sort of compliment, John said, "Hey... Burn your sticks, man."

Then there was the time that John Jensen and I heard that Stanley Clarke was going to be at the Scientology center in Tampa, and would be jamming with some musicians. Yes... back in those days, we did dabble in Scientology. Hey... if it was good enough for Chick Corea, it was good enough for us! Anyway, John and I were definitely not invited to the jam session, so... we decided to go anyway and just bluff our way in. So we drove to the place in Tampa and walked in carrying our instruments. We tossed off a casual, "We're with the band. Where do we set up?" whereupon a very cheerful and not-very-bright young Scientologist indicated directions to the correct room. And that is how we got to jam with Stanley Clarke. Over the years, I've found that a casual "I'm with the band..." can get me into lots of places where I don't belong.

In terms of destroyed instruments, the best (or worst) jam session John and I attended was at, I think, a Ramada Inn lounge... This one was definitely not John's fault! As we were playing, there was this guy who was drinking... and drinking, and drinking. He seemed to really be enjoying the music, but I got the feeling that he would have applauded a healthy belch. At any rate, he seemed especially to enjoy John's trombone playing, and began to try to hook dollar bills on John's slide when it was out. John played with his eyes closed so he couldn't see the guy, but when the guy accidentally touched John's slide, he could feel it. The first couple of times, John was very polite: "I'm glad you like my playing, but that can mess up my chops. Please don't do that." Finally, John was reduced to, "Look, man. I told you not to do that. Now please just sit down and listen!"

Well... I could see the drunken guy stewing about that. He got more and more angry as he got more and more drunk. Finally, when John started a solo, this drunk lunged at John, knocking his bone out of his hands and began wrestling with John on the floor. They were actually rolling back and forth over the top of John's slide, which was now flat on the floor. Seeing that John was in trouble, I jumped to the rescue... the trombone, that is... In my defense, that was what John would have wanted me to do. They were still rolling back and forth across the slide. I thought, "If I can just slide the slide along the floor until they're not rolling on it, then I can pick up the bone relatively unharmed". That's what I did. Unfortunately, just as I got the slide out from under the two combatants, and started to pick it up --- they rolled over on it, bending the slide into the shape of a "J". John was not amused when I later pointed out that it was the same as his initial.

I don't remember who the victor of that confrontation was, but the trombone was decidedly the vanquished. I guess it goes without saying that the bone was totalled. Luckily, it was a Navy instrument. I don't think John had to pay for that trombone. Many years later, I had to pay for a Navy guitar I "lost"... but that is another story. Time to practice...
Posted by John Derby at 7:00 AM