Rags to Polka Riches in America 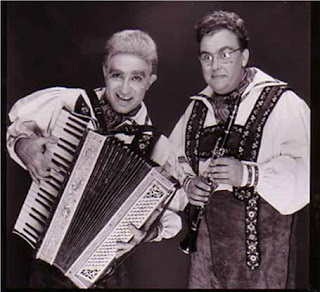 It's been a quiet 4th of July for us. We went to church this morning. I wore my NMA t-shirt because it has an American flag on the back. Several other members of our little country church wore patriotic shirts, too. After church I took a nap: I'm still getting over exhaustion from the NMA Reunion road trip. Now we're watching patriotic movies. Movies like Rambo II and the Shmenge Brother's The Last Polka.

What could be more American than Rambo II, when "Sly" kicks some Viet Nam butt to free some of the American servicemen who we all know were left behind. I just wish the movie was based on fact... that someone(s) actually did go in there to free the captives.

On a much lighter note, what, I ask you, could be more American than the Shmenge brothers, Yosh and Stan? Here are two musicians from Lutonia who came to America with nothing but the clothes on their backs, a set of professional Gelkes (pickle jars), a Clarinet, and an Accordion. They had nothing but a dream... a dream to bring their own inimitable style of music to the polka-starved masses of the United States.

After watching Rambo II, I dug out my old phone book and decided to try calling Yosh Shmenge. I hadn't seen him in years. Since the Shmenge brothers retirement in the 80's they dropped off the musical map. Luckily, Yosh still had the same phone number and was happy to hear from me. After some small talk and catching up on family news, my old friend consented to a phone interview exclusively for the avid and faithful readers of my blog:

JOHN: Yosh... It's so good to talk to you again. The musical world lost two gems in its crown when you and Stan retired. What have you two been up to for the past twenty-five or so years?

YOSH: No comment... (laughing) No, I'm only kidding. You know, it's our old joke, Stan and I, to say "no comment" when the media ask us a question. But seriously, we have been enjoying our families... uh, enjoying spending time with our families and... Well you know, we stay busy. Fishing. We go fishing a lot.

JOHN: Do you ever miss the old days? The fame? The girls?

YOSH: Sure... sure, we miss the old days playing music, you know. The fame? We never did what we did for fame or money. Of course the money was nice. Let's be honest. But the money is not the whole thing, you know. It's the music. The Polka music!

YOSH: (laughing) No... no... no, we don't miss the girls. There really weren't any girls. Those rumors about us and the Lemon Twins... they were just rumors. Bad rumors. They upset our wives. Of course, the publicity... now that was good. You know, in show business they always say that there is no such thing as "bad" publicity. In fact, we sold a lot of records because of it. I don't know who would start such a rumor. Some people in the business, you know, other polka artists, said that the rumors were started by Stan and myself. But why would we do such a thing?

JOHN: Well, we're not trying to dredge up old rumors, but it sure would be good to smash it once and for all.

YOSH: Well, I can categorically say that the Lemon Twins were never in my hotel rooms at the same time! After that, all I can say is "no comment".

JOHN: So how is your Independence Day going. Are you having fun?

YOSH: Sure, sure... We are having the fun. My wife made Raisin Surprise Balls this morning and, lucky me, I found a raisin in one of them! We had some left-over Cabbage Rolls for breakfast. Stan and his family are going to come over later for a barbecue.

JOHN: Really? What will you cook?

YOSH: More Cabbage Rolls. And then after dark we'll light some fireworks. I bought some from a friend. Oh, I know what you are thinking: it's not legal here. Well all I can say is that it helps knowing the police chief, Mark Kasprzak, he's a good friend of mine, and not a bad Gelke player in his own right. Don't tell anyone, but Stan and I are planning a surprise for the families: We still have our old Michael Jackson costumes and light sabers. We're going to give them a laser light show.

JOHN: Sounds like fun. I wish I could be there. But let me ask you...

YOSH: Sorry to cut you off, but I just wanted to say something.

JOHN: Sure. Go ahead.

YOSH: Well, it being Independence Day. Stan and myself. We know we're not originally from America. We are from Lutonia. We have the dual citizenship, so I guess that means that we are half American and half Lutonian. Either that or one of us is all American and the other is all Lutonian (laughing). But how would we decide who is which? But seriously, we were just two poor Lutonian boys when we came here. Now look at us! We have lived our dreams. And that's the best thing about America, isn't it? Whatever your dream is, you can have the freedom to work for it. And, with a little bit of luck, you can make your dreams come true. America was founded by immigrants, wasn't it. I think there should be a way for people like us to come to America. Don't get me wrong. I'm not talking about the people who have political or financial reasons for immigrating. I'm talking about people like Stan and me... people who want to live the American dream.

JOHN: Thank you Yosh. I think that's the way we all feel, but it's good to hear it.

YOSH: And I would also like to say that during World War II, when the Nazis invaded Lutonia (they wanted our Gelkes, pickle jars, as there was a shortage in Germany), they almost wiped out Lutonia. Think about it: without Lutonia, there would be no cabbage; no Raisin Surprise Balls; no Gelke playing and, by the way, no Yosh and Stan Shmenge. So I would like to say thanks, and I know I am speaking for Stan, the Lemon Twins and the entire Happy Wanderers Band, too, when I say this... I would like to say thanks to all the American servicemen and women who fought in all the wars so that poor countries like Lutonia could be free.

JOHN: Thanks very much, Yosh, for that statement. As a retired Navy Musician, I...

YOSH: Oh, I don't want to forget the musicians. Being Lutonians, we can appreciate the musicians maybe more than many Americans, the music being a large part of our heritage... that and cabbage... But the musicians work hard and work even harder when there is a war. It's the musicians who keep the morale up when the war is happening, both at home and on the battlefronts. You were asking what I've been doing since retirement?

JOHN: Yes. I think my readers would like to know.

YOSH: Well, part of what I've been doing is to study the American history for my citizenship, you know. And I read that even back in the Civil War the musicians went with the troops to help with the morale. The soldiers... they had nothing! No Raisin Surprise Balls, no cabbage rolls, nothing. But they did have music to keep their spirits up. I read that at night, after the battles, the bands would entertain the troops. Sometimes the bands from both sides would entertain the other troops!

YOSH: Yes, it's true. Look it up in the history books. There was this one time when the Confederate band had a very good coronet player. I would not be surprised to find out that he was Polish: they almost always make the best brass players. Anyway, the Union soldiers could hear him playing from the Union camp. The Union and Confederate bands would take turns playing tunes. It was like the battle of the bands, you know. And one night the trumpet player didn't play. The Union soldiers yelled, "Hey, Johnnie! We want to hear that coronet!" The Confederates replied, "He's afraid you'll ruin his horn." So they called a truce for a concert. Now that's what I call making peace!

JOHN: That's an incredible story. You say it's true?

YOSH: Yes. It's true. Look it up for yourself. Anyway, I got to go now, but I didn't want to go without first saying the thanks to America. Stan and his family will be here any minute...

JOHN: One more question before you go... Your records are still selling like hotcakes. You and Stan have become sort of cult icons, so to speak. Any chance that the two of you will come out of retirement?

YOSH: Well, I don't know about the "cult" thing... We gave it some thought, but in the end it turned out to be too expensive. About whether or not we will come out of retirement? All I can say is (laughing)... No comment!
Posted by John Derby at 5:58 PM