A Mistake of Case Identity 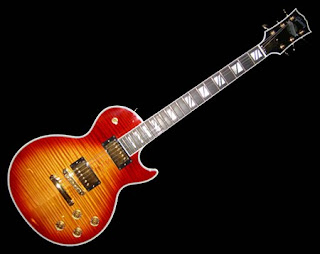 Shakespeare used this device in several of his plays: Much Ado About Nothing, A Midsummer's Night Dream, and Comedy of Errors, for instance. Rossini, Bizet, and Gilbert & Sullivan used it in opera. Alfred Hitchcock used it in North By Northwest. There's even a semi-famous episode in the sitcom Fresh Prince of Bel-Air.

I'll admit that I've had a few yucks over these and other cases of mistaken identity, but what about a "mistake of case identity", i.e. mistakes on the type of case that will hold my Les Paul Supreme, a.k.a. Axecalibur? Not so durn funny!

First, we ordered the Gator flight case designed for Les Pauls... Didn't fit! We sent it back (they charged me shipping for the return to the warehouse) and ordered the SKB flight case specifically molded for the Les Paul. Also didn't fit!! You see, the problem is that the Les Paul Supreme is just a bit thicker through the body than --- ALL the other Les Pauls! That's right: the Les Paul Supreme is the only LP model Gibson makes that is a hollow-body (meaning there is airspace between the front and back of the guitar), whereas all the other Les Pauls are solid wood throughout. The hollow-body construction makes it perfect for being an all-around guitar which can play a variety of styles, including especially jazz, which requires a warmer tone. But using either of those cases would have caused big problems if I had followed my usual faster-than-light snap decisions personality and leaped before looking. Due to the thickness of the body, it would have left about 1/2" space between the back of the neck and the neck rests. If I had used it, it would have caused the neck to warp. Bad news for me, not only because it would ruin a really nice guitar, but also because Dracrevocsid, the Lady of Lake Taneycomo, would have doubtless turned me into a cockroach... or maybe even something worse: a liberal!

So now I have a problem: the case that came with the guitar (albeit a good one) is not flight-worthy. So if I go to D.C. to attend Tracy Ford's interment at Arlington in the early fall, I had planned to take my guitar to get a lesson from Rick Whitehead. Since I can't take my guitar on the airplane, I'll either have to fly without the guitar or... (scary music)... drive! These old bones don't think I can drive that far, even if I take a friend to help with the driving. So now I have decisions to make. And I don't like either choice. Aaargh!

In other news, practice is going well for my recital. I'll be playing arrangements by Herb Ellis, Barney Kessel, Gene Bertoncini, and Bob Roetker, as well as a couple of my own. I've been concentrating on the classical guitar pieces for the last few days. I need to transcribe them from recordings and get to work on them as they will take the most practice time to get under my fingers.

Speaking of that, I can almost feel Dracrevocsid breathing down the back of my neck. I'd better get to practicing.
Posted by John Derby at 4:31 AM