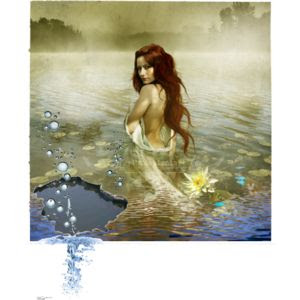 This morning I was sleeping peacefully, visions of sugar-plums dancing in my head, when I heard a voice say, "Wake up. Wake up, you sleepy head. Get up. Get up. Get out of bed". I opened one eye and, of course, the voice belonged to Dracrevocsid, the Lady of Lake Taneycomo. So I went downstairs to make some coffee, followed by Dracrevocsid going "Shhh! Shhh! You'll wake her up!" all the way down. "You 'shh'," I said, "You sound like a trumpet player blowing his spit-valve.

We got downstairs and, after the coffee was ready and we'd both drank a cup, I asked, "Long time, no see. What words of wisdom do you have for me this morning, oh Lady of Lake Taneycomo?" She replied, "I can't get started. I could write a book... " I said, "It must be a pretty good gig... I mean just going around giving everyone advice and then splitting. It reminds me of that gig I used to have delivering singing telegrams: going to parties, busting everything up and then cutting out! Why, I remember this one time when..." She nodded and interrupted with, "Yes, yes... I'm sure it's all very interesting. But why is it that you mortals always seem to think the 'song' is you? Concerning my gig as Lady of a Lake, it's nice work if you can get it, but believe me when I say that it's not all lollipops and roses. Once you become a Lady of a Lake, the party's over! All that youthful frolicking? It don't mean a thing! If I knew then what I know now... Oy... I could write a book!"

I didn't mean to cut her off --- well, actually, I did mean to cut her off --- but I asked her what the purpose of this morning's visit was. I mean, I hadn't yet got over my case of "road lag". And I was beginning to see a pattern: I asked her if everything she was going to say to me this morning was going to have a song title in it? "... You seem to have like 'theme days'... Sometimes you make bad puns. Other days you speak in Chaucerian English..." She broke in, saying, "Am I not a Lady of a Lake??" I told her that was my point, exactly, and I asked her again if today was yet another theme day. "Maybe... Maybe not! Don't blame me. As Lady of Lake Taneycomo, I don't get around much anymore. Anyway," she went on, "no matter how I say things, I always speak to you about important things.

"What's important, you may ask? Obviously, music! And anyway, you've got me all jazzy feeling with all that music which was being played at the NMA Reunion." "You were there?" I asked, incredulous, "I thought I'd given you the slip... I mean I'm surprised you could break yourself away from your other duties, oh Lady of the Lake. I never saw you there! How did you find me?"

"Well, it wasn't easy to find you, no thanks to you!" she said. "I left you a note..." "It said 'Gone to San Antonio'... nothing more! Do you have any idea how many hotels there are in San Antonio? Well, there are a lot. And they kept throwing me out of the lobbies, saying I wasn't appropriately dressed! Imagine!" I said, "You've got to admit that your attire... well let's just say it doesn't leave much to the imagination. And anyway, how did you get down there?" "Imagination??!!" she said apparently ignoring my question, "I wasn't aware that you mortals had any of that! I often have an extremely hard time convincing musicians, especially drunken Navy musicians, that I'm not just a chemically induced hallucination. How did I get down there? A friend suggested... (You have a 'friend'? I interjected) Don't be a smart-ass! Of course I have a friend. My friend, of which I have many," she said over the top of her glasses as though daring me to object, "suggested that I take the 'A' train. (and she explained in response to my look of disbelief) It's a magical train, a lot like the one that travels to Hogwarts. It can take us Ladies of Various Lakes and other magical, mystical, musical beings literally anywhere we desire.

"So I took the 'A' train to San Antonio and finally found you at the Doubletree Airport. You didn't see me precisely because I didn't want to be seen. I hid in the ice-water dispenser in the 'small stores' where they were selling t-shirts and such. And oh, by the way, it would have been nice of you to buy me a t-shirt for future use. Maybe then I wouldn't be thrown out of so many hotel lobbies. At any rate, I hid in the ice-water dispenser (and it was quite cold, thank you very much for asking) and listened to all the jamming going on in the bar next door. I must say that you comported yourself nicely." "Comported??" I asked. "Yes, 'comported'. I could have said 'played' or 'performed' but I like to have options when I speak." "Yeah," I said, "I know... I get that a lot from my wife."

"Don't interrupt," she continued, "And I hitched a ride home with you by hiding in your wife's ubiquitous water bottle. So I've come, this morning, to say to you that, after listening to you play (there, are you satisfied now?) that I think you have what it takes to make at least a modest income playing jazz. I now give you another quest. And you should blog about it, it helps me get new clients. Your quest is to search for the right venues in which to perform good music. Oh, you can play some 'crap', as you call it, on bass, just to get your name around, but I expect you to find such a jazz venue. And I give you a time limit. Before the next NMA Annual Reunion I will expect you to find such a venue and make at least a little money playing there.

"That wasn't so difficult, now was it?" "No. Not too difficult," I admitted, "Say, do I get another gift?" "I was coming to that," she said, "My stars and gardens but you mortals are an impatient lot! I shall send you a bass guitar like no other, and you shall call it 'George'!" "George??" I asked, "Rather an odd name for a bass, isn't it?" She went on to explain, "'George' was my favorite pet catfish who sadly ended up becoming breakfast for some mortal. I was asleep at the time or I would have turned the fisherman into a great worm to give the fish in Lake Taneycomo something to chew on."

"Well," she said with a glance at her Rolex, "Time to get on with some other bits of magical, mystical, musical responsibilities. So-and-so needs a new set of strings, what-his-name has no gigs on the calendar... the list is endless." "Wait a minute," I said, "What about the bass? I mean 'George'?" "Patience, mortal," she thundered, "You shall have it well before the autumn leaves drift past your window. Time for you to practice. As for me, I've got to get out of town!" and with that, she vanished.
Posted by John Derby at 4:50 AM